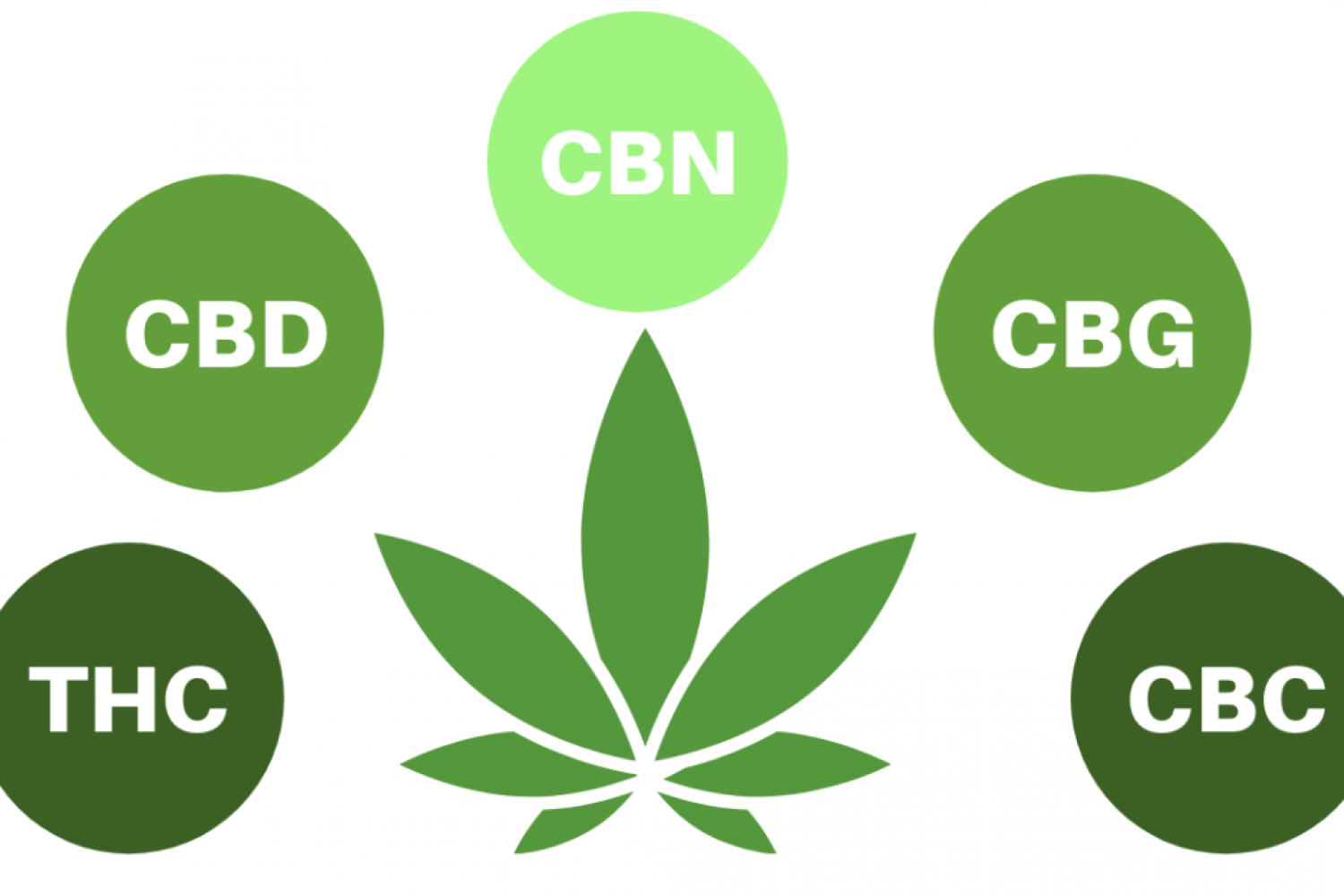 When we talk about cannabis and cannabinoids these days, we almost exclusively talk about CBD (cannabidiol) and THC (tetrahydrocannabinol). And, while THC and CBD brings numerous health benefits to its users [not to mention a wicked high in the case of THC], they are not the only cannabinoids that deserve a mention.

That’s perfectly okay. If you’re a stoner, I mean. But, if you’re someone doing this for a medical reason [any medical reason], you’re probably interested in knowing what it is you’re actually ingesting here. Heck, you should be interested even if you don’t care about your health.

Because, these compounds are doing you a world of good.

Of course, I’m talking about cannabinoids and terpenes.

But… before I go on….interrupting the program here to give you the chance to nab some marijuana buds that are bursting with the good stuff!

Looking for More Than THC and CBD in Your Spliffs? 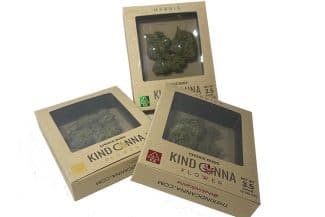 Currently, researchers have been able to isolate 113 different cannabinoids in the cannabis genus, which are spread out between 8 major cannabinoid groups. Cannabinoids are specific chemical compounds that link to cannabinoid receptors in our endocannabinoid systemIn this post, we will discuss 6 of them – CBG (cannabigerol), THCV (tetrahydrocannabivarin), tetrahydrocannabinolic Acid (THCA), CBN (cannabinol), cannabidivarin (CBDV), and CBC (cannabichromene). On the side of the terpenes, we will again take a look at the 6 of them – myrcene, humulene, limonene, pinene, linalool, and beta-caryophyllene.

Read on to find out how each of these cannabinoids and terpenes can affect your health, or help you treat certain conditions that you might be suffering from. Keep in mind that cannabinoid and terpene research is still at its starting point – where possible, we will point to studies and ongoing research. Where not, we’ll discuss in more general terms, relying on anecdotal evidence and the experience of thousands of happy cannabis users.

Cannabigerol is a rarely-mentioned cannabinoid but the fact remains, without it, most popular cannabinoids wouldn’t exist. THC and CBD are both byproducts of cannabigerol acid that is broken down in the plant to make THCa and CBDa.

However, in its pure form, CBG is a highly useful cannabinoid. It works by increasing the levels of anandamide – an endocannabinoid that is found in our bodies. Anandamide is extremely important for homeostasis and regulates things like memory, sleep, and appetite.

Studies into cannabigerol are currently ongoing, but the results seem to be promising:

Although extremely similar to THC in chemical structure, THCV has very different properties to it. The compound’s lack of two carbons (which is the only difference to THC) nonetheless makes it an appetite suppressant, which is the total opposite of THC.

THCV can also help with diabetes by reducing insulin resistance and regulating blood sugar. It also reduces panic attacks by acting as a mild anxiolytic. People affected by osteoporosis can benefit from potential drugs that have THCV as an ingredient since it has been shown that it stimulates bone growth.

Some THCV benefits include:

Cannabichromene is another of the non-intoxicating cannabinoids, similar in its feel and effect to CBD. However, while CBC does not bind well to CB1 brain receptors to produce a high, it does bind to other receptors like the TRPA1 and TRPV1. These specific receptors are linked to pain perception, which makes researchers speculate that CBC might hold the key to producing truly effective pain management drugs that do not have dangerous side-effects.

Through its interactions in the endocannabinoid system, CBC increases the levels of our own, inherent cannabinoids, which are then released in abundance. One specific endocannabinoid that is triggered by the presence of CBC is anandamide, which is also linked to pain suppression.

Some speculated health benefits of CBC are:

The last cannabinoid in cannabis we want to share with you is cannabinol, or CBN for short. Cannabinol (CBN) is an interesting cannabinoid because it’s only created after THC degenerates. This means you’ll only find high quantities of CBN on plants that have been exposed to oxygen for longer periods of time. This fact alone was enough to make CBN undesirable to farmers, retailers and consumers alike. However, recent findings have sparked a new discussion about this mysterious cannabinoid.

The content of CBN in most cannabis plants is less than 1%. However, that’s more than enough to make it useful, as researchers believe that it has powerful sedative properties, and that it might be used as a sleep aid. You’ll also experience the benefits of CBN if you’re microdosing on weed.

Some of cannabinol’s benefits are:

Recent and ongoing studies have shown that CBDV can be extremely beneficial when it comes to treating epilepsy and other neurological conditions. Various studies on mice confirm that it’s a very effective antiepileptic and anticonvulsant that works to stop convulsions even if an epileptic episode does happen. In September of 2018, a drug for two distinct forms of childhood epilepsy was given a DEA approval.

The main active ingredient of the drug is cannabidivarin. Additionally, CBDV is an appetite suppressant that can potentially help with treating obesity as it doesn’t have any psychoactive properties or side effects that usually accompany drugs for appetite suppression.

THCA is a predominant compound in some cannabis strains. Before it’s heated and turns into THC, it’s completely non-psychoactive, which means that it doesn’t alter consciousness or make you high. Research into THCA is still in its infancy stage, however. What we know so far is that it has anti-inflammatory and neuroprotective properties, making it a possible candidate for treating conditions ranging from autoimmune diseases to Alzheimer’s and Parkinson’s. It can also help to calm the stomach, so it’s good for treating nausea and appetite loss.

One study shows that THCA can be extremely helpful when it comes to treating various seizures and epilepsy. This study found that just two milligrams of THCA administered daily can reduce the frequency of seizures by up to 90%. Another study, conducted on mice, concluded that the same cannabinoid acid can reduce proliferation (growth) of prostate cancer cells.

6 Major Terpenes in the Cannabis Plant 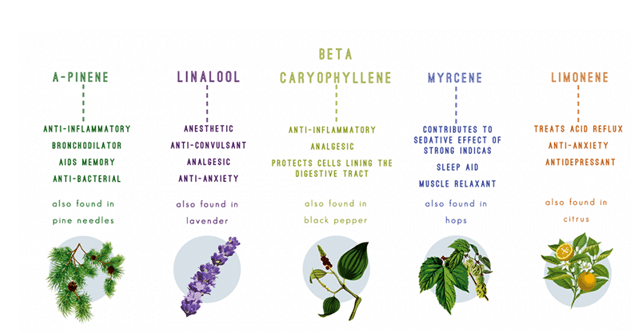 In addition to various cannabinoids, the cannabis plant is also rich in terpenes. Terpenes are essential oils that are not only responsible for the various ways in which the marijuana plant can smell, but also have healing properties of their own. We’ll take a look at 4 different terpenes that make the most of the terpene profile of every marijuana strain – they are myrcene, humulene, limonene, and pinene.

The most common terpene found in the cannabis plant is myrcene, and it gives that nice peppery flavor that’s pretty similar to what you’d see in hops or beer. The abundance of myrcene is so high that it actually accounts for around 20% of the terpene profile in almost every cannabis plant. 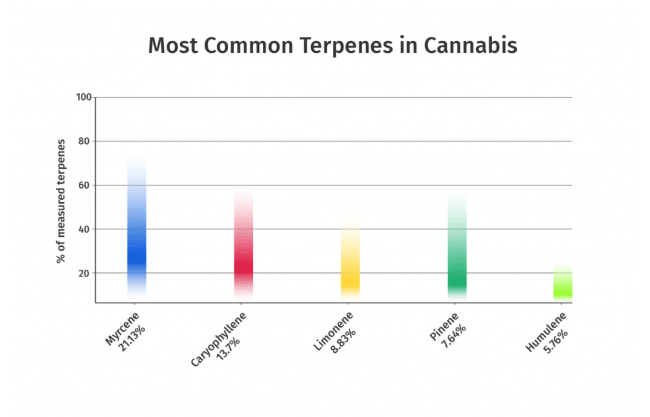 While more research is needed into myrcene, there is some evidence that it has powerful medicinal properties. It’s been used in Brazilian folk medicine for centuries, and it’s the Brazilian scientists who first did a study on it. They found that myrcene reduces pain by increasing the body’s own pain-killers but their findings are still debated.

Humulene is one of the first terpenes ever identified. It was originally found in hops but there’s an abundance of it in cannabis plants, as well as other plants and flowers. It gives weed its somewhat earthy aroma and notes.

Early research has shown humulene to be anti-proliferative, meaning it prevents cancer cells from growing. Also, it proved to be effective in suppressing appetite, making it a potential weight-loss tool. Furthermore, like many other terpenes in cannabis, it also reduces inflammation, relieves pain and fights bacterial infections.

Beta-caryophyllene is a funny little terpene. Not only is it responsible for the taste and fragrance of some cannabis strains,it can also act as a cannabinoid. What this means is that BCP can act on cannabinoid receptors in the body, specifically the CB2 receptor usually associated with CBD and THC. Abundant in cannabis, pepper, cloves, and cinnamon, beta-caryophyllene has been found to have an analgesic effect in mice. Although more research is needed, it might turn into a THC substitute for patients that need to be fully functional after medicating. Additionally, it can potentially be used to treat anxiety and depression. Caryophyllene vaporizes at 266 F (130 C).

This second most abundant terpene in nature can be found in citrus and various other fruits. While most cannabis strains will have some percentage of it, it’s not so prevalent. It gives the plants their lemony smell and aroma, which is not surprising considering the name.

Limonene has antifungal and antibacterial properties, and research is currently underway to determine its usefulness as a mood-enhancer. It reduces stress and studies have even found that it inhibits the growth of tumor cells.

Pinene has a strong pine aroma and is more abundant in marijuana plants than in hemp. Still, it’s pretty common to find traces of pinene in almost every strain of cannabis.

Pinene is, perhaps, the most researched terpene out of the bunch. Because it’s so abundant in nature, its effects have been guessed at for a long time – pine needles have been used for making asthma remedies for centuries. Additionally, studies have shown that pinene slows down cancer growth, and acts anti-fungal and anti-inflammatory. Also, it seems to boost energy and focus so it can potentially be used as a remedy for lethargy or attention disorders.

Linalool might sound funny, but it’s most likely responsible for that flowery smell that keeps you coming back to cannabis. It’s distinctly floral in fragrance and gives lavender its hallmark smell. That is why it’s used extensively by the perfume and cosmetics industries. Studies have shown that linalool can be successful in blocking pain and acting as a powerful anti-inflammatory. Linalool vaporizes at 388 F (198 C).

Start Getting the Benefits Of ALL Cannabinoids And Terpenes

While these are not all cannabinoids and terpenes that can be found in the cannabis plant, they are the ones that have proven medicinal properties. In order to reap the benefits of those properties, make sure to only use marijuana buds that are packed with them!

Looking for More Than THC and CBD in Your Spliffs?