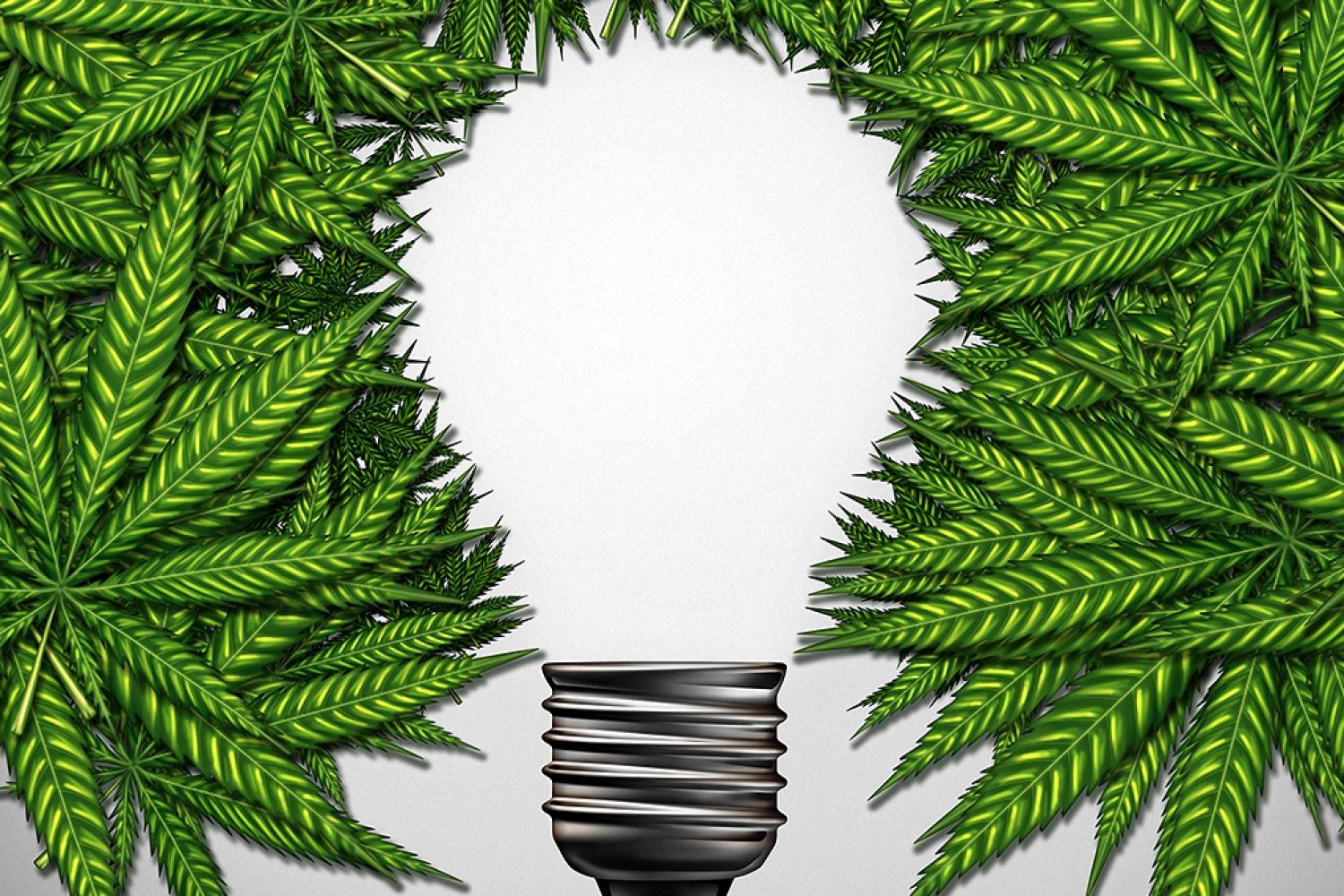 For artists and creative people in general, cannabis has been a creativity supplement for thousands of years. The kick of relaxation, clarity and connection with your surroundings a hit of sativa can give you can be utilized as a significant boost in imagination, open mindedness. You are attuned to your craft 100% and the Idea train is working full steam ahead.

Being a dabbler in songwriting myself, I can tell you with full confidence that whenever I use cannabis to boost my mind for ideas, I come up with the most vibrant of  melodies and the most sincere and vivid of lyrics. It takes an immense load of my mind and focuses it to the very core of my current activities and observations. This way, my creativity is greenlit to fly without any second guessing, doubts or overthinking.

Of course, not all of the ideas which spring to the surface turn out fantastic. Some of them are great and resonate with me instantly, while others may be weaker. This for me is absolutely normal and understandable. The point was to amplify my brain and allow for an insurgence of jigsaw puzzle pieces which have a strong potential to become a part of something grand.

Looking for Weed Strains That Will Fire Up Your Creativity? 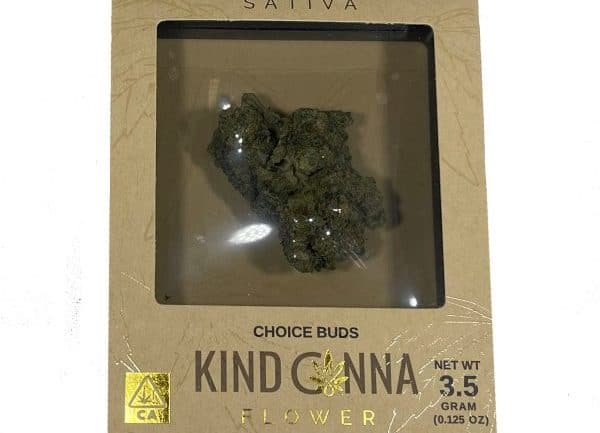 The Why Behind the Weed’s Connection to Creativity

Numerous musicians, artists, performers and entrepreneurs use cannabis as a creativity and work fuel on a daily basis. Ranging all from old rock cats like Neil Young, Indie hotshots like Kevin Parker to rap Gods such as Snoop Dogg, Dr. Dre and Wiz Khalifa, all of these artists use marijuana to help them get into the zone while producing new material.

Spanish musician Adrianigual says: “Making music is more fun with marijuana, because you laugh more, and you kind of lose contact with reality – which is the disease we all suffer from. You can get in touch with your mind, and concentrate better on your own ideas, which is what I think we’re all seeking.”

Clinical psychologist Gráinne Schafer states that cannabis makes people connect dots of concepts which may seem unrelated. The brain does not worry about random thoughts bumping together which can result in a richer assortment of ideas coming to light.

Schafer has issued a study which has shown that the creativity boost from marijuana depends on your own capacities and mindset for creative work. People who claim that they are not very creative will get a much more intense boost than people who are used to it on a daily basis.

How to Dose Weed for Creative Outbursts

In order for weed to hit your mind at just the right level of intensity to let your creative juices flow, it is important to know your own capacity and tolerance for it. If you already know exactly how a certain amount of weed will stimulate your brain, then you’re good to go. If you are unsure, try with smaller doses first until you reach a high which suits your creative needs best.

Studies in fact show that taking smaller doses is more beneficial to creativity [so avoid things like cannabis caviar, which has too much THC in it]. It is important to achieve just the right amount of a high to stimulate your brain to aid in the process of creation. If you go overboard, you can easily lose focus on your work and drift into a high which may diminish your creative progress. In fact, I would avoid infused prerolls here because they hit too hard.

11 Weed Strains That Will Pry Open Your Creativity 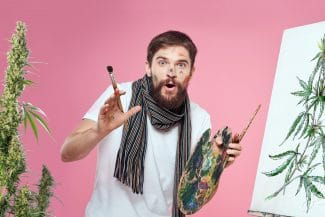 In the section below, I will guide you through a list of weed strains which are recommended by both consumers and websites as the go to solutions for boosting your creativity potentials.

Please note that this list is not set in stone. I wholeheartedly welcome you and other readers to share their experiences and recommend even more strains in the comment section.

Kali Mist is a mix between two sativa-dominant hybrids. It holds 19% CBD and is rich with the Myrcene terpene. Not much is known about his strain in terms of its genetic history. It is believed to date from the early 1990s.

This weed strain will provide you with focus and energy so you can fully immerse yourself into creative brainstorming. An ideal strain for active thinkers, artists and anyone who needs a little push in terms of  inspiration and motivation.

Named after a famous marijuana activist, also known as “JH”, “The Jack” and “Platinum Jack”, this hybrid strain was created in the Netherlands in the mid 1990s. It holds 17% of THC and is rich in Terpinolene.

It produces an even, middle of the road kind of high while leaving plenty of headroom for your brain to focus on creativity.

Chemdog is an all-star weed strain, renowned for its mysterious background and a wild, intense high. It holds 18% of THC and is predominant in the Caryophyllene terpene.

Beginners beware. Chemdog is strictly a veteran’s strain due to its intense and powerful cerebral and body high. If you are proficient in remaining level headed while under such heavy influence, it is definitely a strain for you. Users online say that once you settle into the high, as heavy as it is, the creative juices are fully free to flow.

With its name immortalized by the classic 1967 Jimi Hendrix banger, you can guess that you are up for an intense experience before even trying this strain out. With 17% THC and the Myrcene terpene, this strain has an earthy-sweet flavor accompanied by a taste of sweet berries.  It’s also packed with a lot of other cannabinoids.

Purple Haze will put you into a deep and euphoric high, removing any negativity or bad moods. The perfect mindset for letting your creative juices flow freely and undisturbed by any inhibitions. Aside from creativity, people often use it as a concentration booster as well.

This hybrid strain is the offspring of the famous White Widow and Blueberry. It holds 17% of THC along with the Limonene terpene.

Berry White gives you a relaxing high which is sure to get rid of any stress or anxiety. Excellent for creative sessions with more people, as it will boost your talkativity as well as creativity. As the high takes some time to kick in, users suggest that you take it at least an hour before diving into work.

A cross between Orange Velvet and Space Queen, this remarkable strain is a no brainer when it comes to boosting creativity. It holds 16% of THC, and its flavor is pretty intense and citrusy.

Jillybean will help you shed down any anxieties and bad moods just like a snake would crawl out of its own dead skin. The high it induces is uplifting, euphoric and is sure to brighten up your day and punch through any creativity block that gets in its way!

Tangie is a sativa strain which is a cross between Skunk-1 and California Orange. A sort of a “reboot” to the classic 90s strain Tangerine Dream, Tangie holds 17% of THC along with the Myrcene terpene, providing a fresh citrusy tangerine-like aroma.

A perfect strain to take when embarking on long and complex projects which would otherwise be very tedious and mundane to do. Its high induces both relaxation and a significant creative kick.

This sativa dominant strain is a cross between Lemon Skunk and Cheese. 19% strong in THC, with the Myrcene terpene to provide a refreshing citrusy lemon flavor with a hint of cheese in the back.

Lemon Cake will induce a cerebral high along with euphoric bursts of energy. This strain is a perfect choice if there is a difficult, concentration demanding task ahead of you. People often use it to uplift their mood and get into the right zone for brainstorming ideas.

Also known as “Lady Bird”, this indica dominant hybrid is a cross between Sunset Sherbet and Mint Girl Scout Cookies. Its THC level is 17% and it is rich with the Caryophyllene terpene.

Due to its rather quick and intense high, novices are advised to approach this strain with caution. However, if you have a strong tolerance for THC, get ready for a bombastic high that will simultaneously pack you with immense relaxation as well as a strong productivity boost. Aside from creativity boosts, Gelato is also used by patients for treating anxiety and Insomnia.

Also known as “Sour D” or “Sour Deez”, this quite popular sativa strain is a cross between Chemdog and Super Skunk. Its most notable characteristic is an intense and pungent smell which reminds one of (you’ve guessed it) diesel. Make sure to store it in an air-tight jar because you don’t wanna lose any of this great smell.

Sour Diesel provides you with a fast acting cerebral high resulting in an intense but a rather pleasant head rush. A great strain of weed to use alone in your creative sanctum.

We are ending this list with a powerful strain aptly named for its strong cerebral (almost trippy) high. LSD is 16% strong in THC with the Myrcene terpene.

This strain provides you with an immensely strong body buzz and an almost vivid cerebral high. A favorite among people who need a little extra push over the cliff in order to see a bigger picture during their creative sessions. People who take it regularly describe it as the ultimate creativity booster among all other marijuana strains.

Looking for Weed Strains That Will Fire Up Your Creativity?